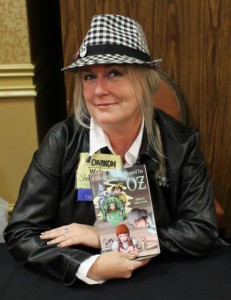 Sherri Dean was born both late AND backwards in a small town in Missouri, which explains a lot. Her mundane hours are spent as a veteran of the animal health care field (and the recipient of many a puppy piddling) until she gets rich and famous. Or was that infamous? She spends her quality time writing, illustrating, making crazy costumes and reading comics.

She credits Forrest J “Uncle Forry” Acan for her love of Science fiction, fantasy and horror, and is active in genre conventions throughout the Midwest. It is at one of these early conventions she encountered the infamous Selina “Buy my books!” Rosen and was thusly corrupted (Ah, but who corrupted whom?) to submit artwork, stories and mad editing skills for Yard Dog Press. Sherri also works hard to fulfill her role as Ms Rosen’s ‘straight man’ in comedy. (She’s a giver folks! That’s what she does!)

Sherri has long referred to herself in the third person, the ‘royal we’ if you will, as the Queen of the Flying Monkeys for years and is only now letting the public in on her secret. (If you’ve met her you already know. If not, do so and BUY HER STUFF from Yard Dog Press.) In addition to commanding her monkey minions, she likes shiny presents and hearing from fans on Facebook. Now, get thee to a computer and make with the monkey adoration!” 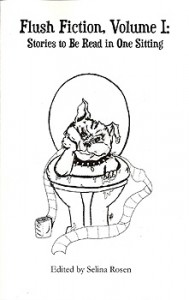