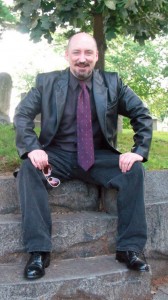 Tim W. Burke spent the bulk of his childhood living within a mile of federal penitentiaries. He graduated from Temple University. His work history includes bowling pinsetter, martial arts instructor, movie usher, owner of a comic-book store, and video producer. He has produced commercials for small businesses and movies found on Netflix.

His humor has been called “hilarious” by The Fix, “amusing and enjoyable” by SFRevu, and “Mr. Rogers meets ‘Pee Wee’s Playhouse’ on crack” by FilmThreat. His horror stories have been called “notable” by Ellen Datlow and “awesome” by the editors at Pseudopod.

His work has appeared in “Weird Tales”, “The Town Drunk”, “Pseudopod”, “Space and Time Magazine”, “Stupefying Stories”, and many more. You can see Tim’s complete bibliography on his website, TimWBurke.com.